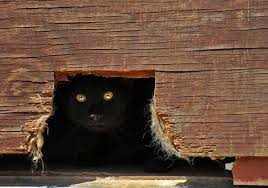 Last week I posted about a rat that had gotten stuck in a hole in the bottom of one of our outdoor trash cans. Today, as I was collecting the trash from the same bin there was a large mouse in the bottom who could fit through the hole and did so. He didn’t get very far but another movement caught my eye. In the back of the storage place where we keep the trash cans, I saw a patch of brown fur and thought another rat had made its way into the area and needed to be “taken care of“.

However, as I looked closer, I saw it was a large Hedgehog hiding in the corner. He wasn’t something that could be rid of so easily and our Siberian Husky, who’s killed his fair share, was off in another part of the yard. I wondered if he was able to get in the storage area but not out so I opened the door as far as it would go and left. Hopefully, it will get the hint and leave.

As I reflected on the Hedgehog I also thought about self-awareness. It’s the discipline of truly knowing and seeing ourselves, understanding what we do well and what we need to improve. Oftentimes, we become focused on the smaller challenges and don’t see the biggest area of improvement we need to make. True self-awareness reveals the largest issue, hidden behind all the smaller things, which needs to be brought out into the light.