← Light that is You
Teachers We Need → 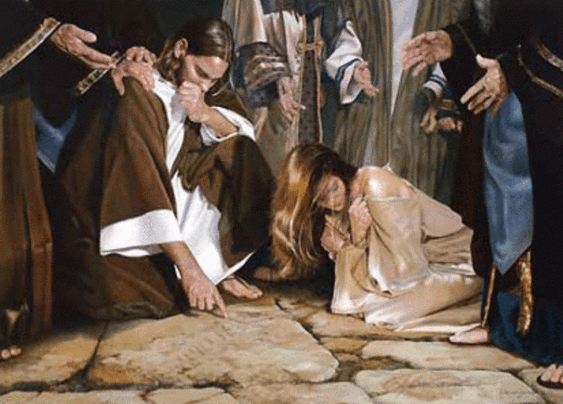 Woke up with a bad headache this morning. After finishing some work I laid down on the couch and closed my eyes. As I rested I thought about the Kavanagh/Ford dueling testimonies yesterday. An image based on the Gospel, According to Saint John, Chapter 8:4-11 (https://www.biblegateway.com/passage/?search=John+8%3A4-11&version=NRSV) came to mind.

In the story overzealous, law-abiding, religious leaders bring a woman caught in adultery. They want to know what Jesus thinks should be done. Instead of quoting statutes, arrogant platitudes and taking sides, he instead bends down and begins writing in the sand. (Legend states he was writing down the sins of those who stood around demanding justice be done.) Jesus, never looking up says; “Let he who is without sin cast the first stone.” He hears nothing but the thud of stones as the accusers leave. He then stands asks the woman where her accusers had gone, she didn’t know, and he told her to; “Go and sin no more.” (You’re free.)

Between dreaming and thinking I saw in my mind Jesus going in to the Senate Confirmation Hearing yesterday. There’s no sand so he brings a White Board. Everyone’s bewildered and irritated at this man causing a scene and taking up their precious time and those watching. This is important! Cameras are flashing, capturing it all for the world to see. The protest gets louder and then Jesus begins writing. First the White Board is facing the politicians, then the reporters, finally the seated crowd behind the two victims and accusers. He finally looks away from the board to the crowd and says: “Let she or he who is without sin be the first to judge.” He turns to the Judicial Nominating Committee and adds; “Or cast a “yes”, “no” vote.” One by one the politicians, reporters, onlookers, and anyone else in the room leave. Now Jesus stares at the two people, human beings, who are both being used one way or another. He speaks in a calm, loving, voice; “You are free. You are forgiven. Both of you go and sin no more.”

In my dream, I can’t see which one he says what to but I’m sure he’s speaking to us all!

For more thoughts, reflections and other writings, please visit: http://www.thewannabesaint.com

← Light that is You
Teachers We Need →