Yesterday I told my therapist three distinct experiences that have happened to me since our last appointment. I do my best to remember or jot down events or emotional moments I encounter and relay them to her. I talk about how I felt, why I think I felt it, why I did something, what I thought would be the outcome, what happened to me and the result. I tell her these things because many times I’m not able to see the big picture because I’m so close to the events and experiences.

When I finished telling her my three stories she then asked a series of questions that gave me the ability to look at each one from a different point of view. I thought they were three separate, non-related moments but she was able to see a common thread and we discussed how and why I reacted in a certain way and the possible reasons they imprinted on me. It was an; “Aha!” moment that I was unable to see without the benefit of a pair of unbiased, professionally trained, eyes.

I don’t love therapy. I tolerate it. I know it’s an invaluable part of my treatment plan for chronic severe depression and a severe anxiety disorder. There are times I walk out wondering what was accomplished and there are; “Aha!” days. I don’t always like what I am shown or discover but I hope that every; “Aha!” helps my journey on this path called; “my life” be easier and worth the struggle.

For most posts, reflections and other writings, please visit; http://www.thewannabesaint.com

I forgot to pray for someone this morning. I talked with them yesterday and they had an appointment today for which I said; “I’ll pray for you.” Then, this morning, it completely slipped my mind! I didn’t realize it until the person I was supposed to pray for let me know everything went well. “Whew!” I then prayed a prayer of thankfulness for the person and for God still working even when we forget to ask.

I don’t think that our prayers determine God’s actions. I think we pray because God is already working and we want eyes that see grace, kindness, goodness from a God that connects himself to humanity in an amazing way.

I am thankful for a God that works even when we forget to ask, friends who support even when we take them for granted, jobs that aren’t always easy but provide us money and other benefits, a family who drives us crazy but we wouldn’t trade the world for, and life’s many miracles and answered prayers, that we can’t see or simply forget to look.

This morning on my way to an appointment I approached a red traffic light. Preparing to stop I also noticed two sets of blue lights on a couple of police vehicles in the opposite lane. After coming to a full stop I observed they were helping out a driver of a tractor-trailer cab who had apparently run out of gas. I surmised this by a small, red, plastic five-gallon canister on the road near the side of the truck. It struck me as funny; this big rig and that small container of gas. Then I thought to myself; “this bit of help could be enough to get him across the street to a gas station. It might not be a lot but it may be enough to get him to place where he can, rest, fill-up, and then continue to his destination.”

Then I thought; “I hope I can be a little help to someone today.” 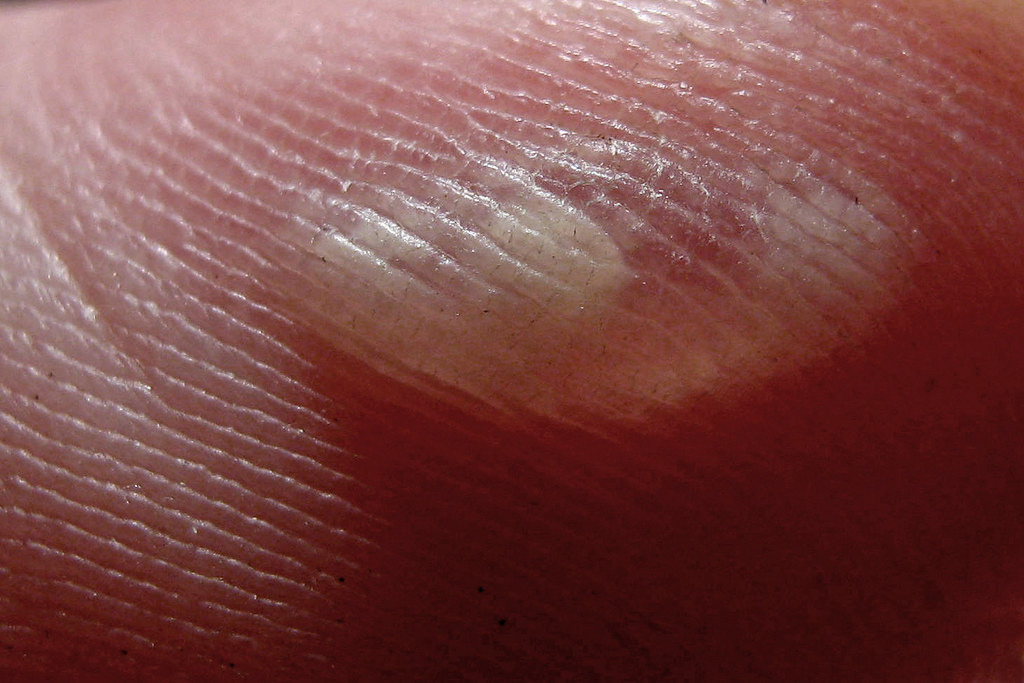 On Saturday, while burning some debris in the yard, I went to grab a stick which was near the fire but not burning. My intention was to put it in a more advantageous position. However, as I grabbed the still cool end of the stick a single burning piece of ash fell right where I placed my thumb. I quickly dropped the stick and began shaking my whole hand the way someone does when they burn themselves. For the past several days I have had a reminder of the encounter, a blister on my right thumb.

The blister is a reminder of the randomness of life. A second earlier or later and I probably wouldn’t have burned myself. In the same way, we often see the haphazard events of our lives. A moment before or after and there’s no car accident or more or fewer injuries in it. A doctor’s appointment a month or two earlier or later and a disease is detected or too far advanced to undergo treatments. A moment premature or delayed and we miss a relationship we cherish or disdain.

Whatever life brings our way there are remains that stay with us. Whether positive or negative who can tell? The most we can do is be aware, open to new experiences and cautiously protecting our souls.

Today, I stopped by Wal-Mart for a couple of items and headed to the checkout area. I had my choice of a person checking me out or self-checkout. The self-checkout had a couple of registers open so I chose one of them. I wasn’t in a hurry, didn’t have an appointment to go to or a schedule to stay on top of, it was simply faster and mindlessly I chose it. Instead of human interaction, an opportunity to say a kind word to a cashier, a chance to stand in line and share a smile, I went with the quickest and the most isolated.

These are the choices we face in our culture. We are able to order online, having most items shipped for free or close to it to our homes, open our doors and live without interaction, relating, or sharing our lives with one another.

At a time when communication is easier than it has ever been in the history of humankind, we are lonely. In a world full of hurting and wounded people we look in another direction to avoid seeing them. On a journey we should be making together we prefer to travel alone. Instead of caring for one another we see the other as a burden to carry.

Go Your Own Way

Go Your Own Way –

A friend of mine told me a story yesterday and I told her; “That would make a good blog post!” So, here goes…

My friend had a procedure done yesterday and needed someone to drive her home from the doctor’s office and to any other place she needed to go. However, on the way to her appointment, my friend’s friend was telling her to go and drive a certain way. On the way home, when my friend’s friend was driving she did the same thing. Because they are good friends and can tell each other almost anything they quickly made a deal. They agreed to allow the other person to drive the way they drive and to go the route they wanted to go. The one who was the passenger would only be a passenger, not a side seat driver. Problem solved. My friend made the comment; “She goes and does her way, I go and do mine. As long as we get where we need to go, the other stuff doesn’t matter.”

I’ve reflected on this story for the last two days. We live in a world divided. People argue and end friendships over big and small things. It makes me wonder why we can’t agree to disagree. We don’t have to be enemies with those who challenge our beliefs, think differently, walk another path, find peace and do kindness different from us. What matters is we all get where we need to go.

This afternoon I had a follow-up appointment at the doctor’s office. They needed to do a routine check-up and wanted a deposit. I had figured as much so I made sure not to leave my deposit at home before I left. I went to the restroom, readied the bottle and…nothing. No matter how much I concentrated there just wasn’t anything that was going to happen. After several minutes I meekly came out of the lavatory and explained the situation to the nurse. She then sent me to the staff vampire who had no such trouble sticking me with a big needle and taking my second deposit by force. I now have a cotton ball and medical tape covering a hole in my arm.

We live in an; “On Demand” world. We get and expect things instantaneously. The problem is sometimes life doesn’t work that way. We may demand expediency but delay and obstruction is what we’re given. If we decide to take what we need to wait on by force pain is often the what we receive instead of what we desire.

It does us good to wait, to not get what we want, to be told; “No!” It reminds us we aren’t all-powerful, possess full control, aren’t as able as we’d like to believe. Wisdom, and the lessons it uses in everyday life remind us who we are, who we aren’t and how to be at peace with both.

Today was the first appointment with my therapist since my father passed. We kept coming back to the theme; “It’s been a long month!” We talked about a lot of things which have happened, are happening and will happen. Responsibilities, experiences, the new normal of living life without dad and how these are impacting my chronic depression and severe anxiety. As we were wrapping up the session her words, her prescription for me was; “Give yourself a break.” In other words, take it one day at a time, don’t fixate on certain challenges, try not to do everything at once and breathe, keep yourself centered.

On the way home I was driving behind a person with a bumper sticker which read; “Of course I love you! Why wouldn’t I?” I received the message and took it to heart. We put such a demand upon ourselves to get things done, live up to expectations, not let anyone down, be what we believe we should be instead of simply accepting ourselves for who we are; imperfect people trying to do justice, love mercy and walk humbly with God and with each other.