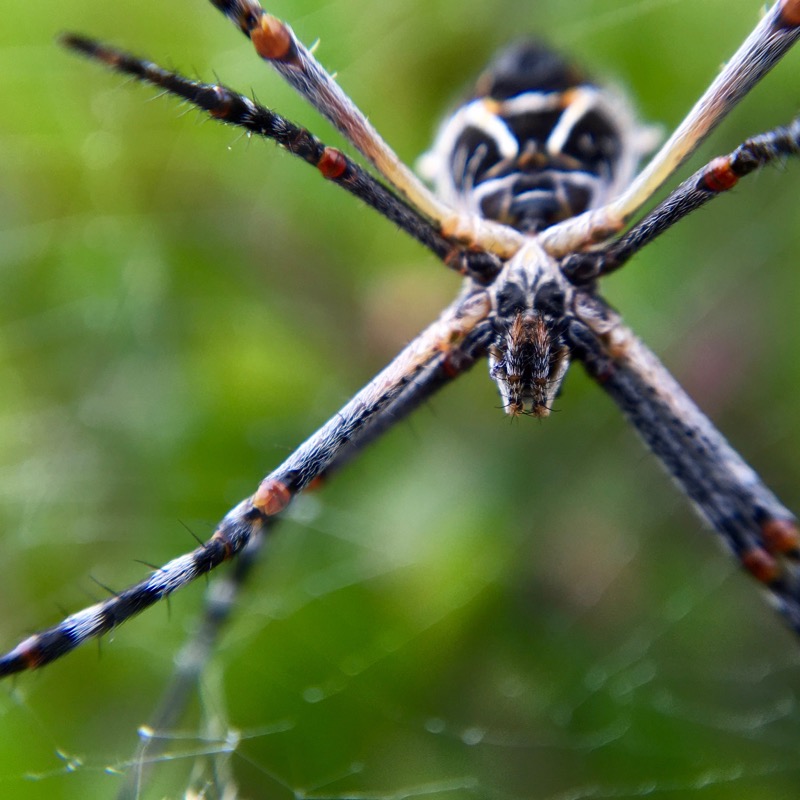 Yesterday, while weed-whacking around the house, underneath a large tree, I felt a sudden tingling sensation on my face and then a spider crawled down from my forehead and on my glasses! It was the only thing I could see. All other things faded from view while this eight-legged insect crawled on my dome. My hands, full of the weed eater put it down as quickly as possible and I swiped my face, brow, and head hoping to knock off the arachnid that seemed to drop from the sky. I never saw or felt it again after my; “Get off me!” dance and hoped it was gone for good. After shaking off the heebie-jeebies I thought about how silly I looked to any passerby who might have seen me. I was okay with that because they weren’t seeing the same thing.

Wisdom tells us that what we focus on is who we become. Our focus should be; love, kindness, mercy, forgiveness. However, too often we focus on what is right in front of us, whatever life brings our way. The next scheduled event, calendar item, emergency, chaotic event, becomes who we are, what our life is about and we never move beyond surface emotions or an insubstantial spirituality.

Focus on one thing long enough and it becomes your destiny. 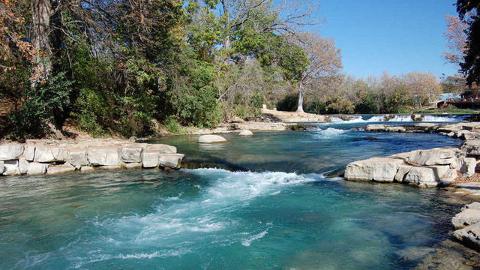 “Imagine yourself sitting on the bank of a river. The river is your stream of consciousness. Observe each of your thoughts coming along as if they’re saying, “Think me, think me.” Watch your feelings come by saying, “Feel me, feel me.” Acknowledge that you’re having the feeling or thought. Don’t hate it, judge it, critique it, or move against it. Simply name it: “resentment toward so and so,” “a thought about such and such.” Then place it on a boat and let it go down the river. When another thought arises—as no doubt it will—welcome it and let it go, returning to your inner watch place on the bank of the river.”
#ThomasKeating, “Open Mind, Open Heart: The Contemplative Dimension of the Gospel”

The problem is we’ve been taught the opposite most of our lives. The famous quote; “Reap a thought, a word, an action, then a destiny,” seems right but our thoughts do not have to lead us to who we ultimately become. We can choose to go deeper, change paths, refuse to be captive to our thoughts by breaking free of them.

They’re everywhere! Well, maybe not everywhere, but we certainly have quite a few of them in and around the house. We’ve found them in the shower, the bedroom, the bed, the ceiling, on hair brushes and numerous other places. Ladybugs! As the weather turns cooler, they’re turning into a real nuisance. Our first instinct is to swat them but they make quite the mess so instead, we will gently gather them up and show them to the door.

Ladybugs are such tiny things that could pose a big problem. In the same way, our lives can be filled with irritations that pose large challenges. A miscalculated statement to a coworker can become a problematic working relationship. A small lapse in attention while driving causes a large accident or at least scares and angers other drivers. A seemingly insignificant gesture can cause a heated exchange and escalate into a fight. What has the appearance of a minor choice can have enormous consequences.

Too often we think it’s the big things which make or break our lives. Truthfully, more than likely it’s the little things that decide who and what we are, will become and decide our destiny.

What are you reacting to? Such a wonderful and powerful question.

We live in a reactive world. Opinions, biases, judgments, loyalties, choosing sides, seems to be what everyone around us is doing. We don’t have to ask for someone’s thoughts on a matter before they tell it to us anyway. Social media is a primary culprit but I’ve heard stories of this happening in restaurants, gas stations, and grocery stores. People can’t shut up or stop typing. It is a wonder anyone can find interior peace when the exterior world bombards our ears with a cacophony of noise and words.

“The space in between” is a difficult discipline which needs broader acceptance. Basically, it teaches that between the incident and the comment is the moment to choose our response. Between the action and the reaction, we have the ability to make the situation better, the same, or worse. In the immediate time following an experience we have the ability to make it more or less unstable.

Reacting, choosing, deciding, what our reaction to a stimulus will determine our destiny. Will we be thoughtlessly reactive, speak without considering, act without thinking about the outcome? Or, will we remember the “space in between” and so grace, kindness, and love?

One of the most important lessons I teach fathers is to watch what they say, not just around their children, but everywhere. What we have a habit of saying comes out in every place of our lives so training ourselves to be careful with our words is a good discipline.

However, what comes out of our mouth can pale in comparison to what we say to ourselves, silently, in our minds. Some of the most hateful, spiteful, belittling, insulting, jarring, judgemental, biased talk never leaves our brain. At times these words are aimed at other but they are also used to inflict wounds upon ourselves. These may be words a parent, relative, coach, teacher or someone in another place of authority and influence said to us during our formative years. I tell our fathers; “negative, denigrating language never leave your child.” The same could be said of the harmful words which wrap themselves around our brain and leave us feeling; less than, worthless, and contemptible.

Words are powerful. So mighty that even if they aren’t spoken can shape the destiny of a life.

I was speaking with a group of men last night and we talked about the ability to be someone different from the person we are currently. I told them; “What you do today determines who you will be tomorrow.” If you want to be the man and the dad you need to be you must first know what you need to change and then begin making the choices that will lead you to your goal.

I went on to explain that everything we do presently, what we watch, listen to, speak about, participate in, everything! makes us into the person we will be in the future. Our present choices shape our destiny. “It’s when we see that now, this moment, is all we have and need to transform, that we finally have the wisdom to become what we need to be.”

As I talked to the men the truth of what was being said also resonated with me and my spirit. The truth, when revealed, is powerful enough to impact both audience and speaker.

This interesting picture and intriguing quote was in my Facebook feed this morning. It caught my attention in part because I’ve been studying Epigenetics. It’s the study of how trauma impacts people and generations following.

One of the experiments used to prove this area of science involved shocking a female rat with electricity when a certain odor was emitted. After a while the rat, even though there was no shock, still reacted when she smelled the specific odor. What’s even more compelling is the rat’s babies and the baby’s babies also reacted negatively even though the second and third generation of rats had never been shocked with electricity when the odor was emitted.

Epigenetics proposes that the genes of the rats have been altered, changed due to the trauma of the original female rat and these genes have been passed down to preceding generations.

“Neurons that fire together wire together” is another phrase used by brain scientists which deal with nerve pathways. The more often we do something, or have something done to us, the more used to certain behaviors and environments we are mentally, emotionally, physically and spiritually. In other words it becomes our definition of normal, our reality. It is only when we are able to learn new ways of thinking, being, can we change our personal and family’s destiny. To consider that the choices for our lives impact the immediate now and our, other’s, future the more important it is to be sure our decisions are filled with wisdom and grace.

A Life that takes a Lifetime to Live

On July, 27, 2010 the world lost a wonderful lady and I lost someone who had a profound impact on my life. Her name was Mrs. Georgia Kelly. Though many lay claim to the title she was in every way a genuine saint. She was a wonderful mother, an outstanding Sunday school teacher and a light in an often dark world. Over the last week I have often found myself thinking of her. When someone you care for deeply takes those final steps toward eternity our Heavenly Father comforts those left behind with memories that console, inspire and challenge us to follow their example. However, as I have tried to bring to mind specific moments, lessons learned, encounters that influenced, I have not been able to capture that one event that encapsulates what Mrs. Kelly meant to me and so many others.

What I keep coming back to is not one moment but one feeling, love. Mrs. Kelly loved me; of this I have no doubt. It was my honor and privilege to know her and be a part of her life. I was one of her many children. In my mind’s eye I picture Mrs. Kelly with her arms open wide and a beautiful smile that welcomed me with what I would describe as God’s grace actualized. In her presence I was safe, accepted, and loved.

In a world where many look for a big singular moment to define their legacy, Mrs. Kelly illustrated that a life well lived is a series of small events. Eugene Petersen describes this as a “long obedience in the same direction.” Her life was a journey, directed by God and lived in the knowledge and strength of His love and grace. Mrs. Kelly stayed on her Father’s path and manifested a love she knew and experienced to all who she met along the way.

I don’t know if the Apostle Paul and Mrs. Kelly will meet on the other side but I do know that he already described her when he wrote his first epistle to the Corinthian church. Georgia Kelly was “…patient; kind; not envious or boastful or arrogant or rude. She did not insist on her own way; she wasn’t irritable or resentful; never rejoiced in wrongdoing, but rejoiced in the truth. She bore all things, believed all things, hoped in all things, endured all things. Her love never ended.” (1 Corinthians 13:4-8 New Revised Standard Version).

We live in a time when people “Tweet” or “Facebook” their every move. The desire to be famous seems to trump all other considerations. Few individuals long for a life that takes a lifetime to live. The challenge of Georgia Kelly is laid before us and a choice must be made. Thank you Mrs. Kelly for reminding me that life isn’t found in the destination but in the journey.