This morning I went to the dentist. I hate going to the dentist! I went at 7:30AM because thinking about the appointment all day would make my anxiety grow by the hour. This way I wake up and go straight there and get it over. I take my phone and ear buds along with me to listen to, a dose of anti-anxiety medicine, and the dentist provides comforting words, gentle work and a supply of Nitrous Oxide (https://www.google.com/search?q=nitrous+oxide&oq=nitrous+o&aqs=chrome.0.0j69i57j0l4.2956j0j7&sourceid=chrome&ie=UTF-8). When I first went to the dentist we sat and talked about my anxiety and claustrophobia issues. He understood and has done a fantastic job making me feel the least anxiety as possible. After it was over I left, slightly woozy but two teeth which needed fillings done completely.

The dentist is one of those things in life you don’t want to do but know have to be done. Know matter how much worry, dread, and procrastination, sooner or later you have to go and if it’s too much later you will regret it. As the numbing in my lips and gums wore off I thought about other things in life we don’t like to do but should. Forgiving people who have hurt us, asking forgiveness of those we have offended, reflecting on difficult and painful situations and asking; “What did I learn?”, allowing wisdom to search the deepest places in our lives, filling the holes in our minds, emotions, and spirits to be filled with kindness, love, and grace. These are never easy but waiting until we are ready might mean we never reach a place of healing and peace.

“You never know where the leaks are until it rains.” #BrianLoging

This morning I awoke to a downpour happening outside. It was raining so hard that when I took the dog out I stood under the overhang while telling him; “Go for it!” (I know, bad owner.)

In the back of our little farmhouse, there is a breezeway which connects to a pumphouse. At one it time did not have a roof. Somewhere, in the life of the house, an owner attempted to put a homemade roof over the breezeway and let’s just say it hasn’t held up. It can handle quick showers and light rain but heavy downpours and it leaks in certain spots. I know where most of the leaks are so I am sure not to put anything on the floor under that area so it won’t get wet.

The remodeling of our bathroom continues and this week the men delivered the tiles which they stacked in the breezeway. This morning I heard a splashing sound and looked out into the breezeway and all the boxes were wet from the passing storm. We called our remodel guy and he assured us it wasn’t a big deal which was a relief. However, this was only one part of our concern. There is a new, major, leak on the breezeway and we’re going to have to figure out what to do with this section of roof.

It’s a pain to be sure but if it had never rained we wouldn’t be aware of the problem.  Now we have to figure out how to fix it. There are times and seasons of life when the rain pours into our lives revealing leaks and weak spots. Wisdom tells us we can be upset at the storm or see it as an opportunity to become more aware of ourselves, who we really are, the places which need attention and do something about it. 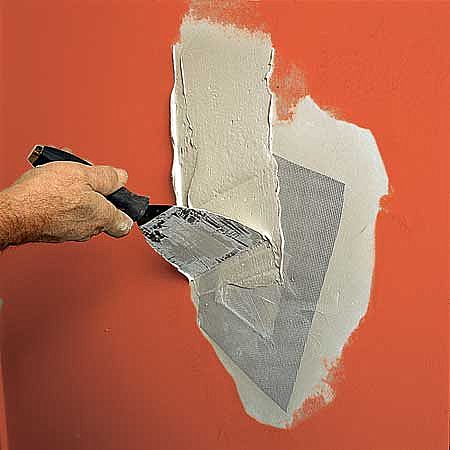 I spent some of the morning and most of the afternoon filling in holes in our walls left by the previous home owner; who seemed to never meet a nail they didn’t like. There were big and small holes, deep and shallow ones. Each needed to be repaired with spackling and sanded down so that the Mrs. and I can begin painting and, hopefully, make something beautiful out of someone else’s mess.

As I moved from one hole to another, patching and fixing, I reflected on the holes which are left in our lives by others. Some of the damage is done purposefully, others by accident. Motives are notoriously hard to decipher but the hurt to our hearts, spirit and faith is much easier to gauge.

Repair work is also difficult. The holes left by family, friends, co-workers, strangers range from bruised feelings to hearts so injured they may never be able to trust again. If only there were soul spackle, an easy way to fix what’s been broken. Alas, repairing holes in our lives only come with time, grace, forgiveness and a willingness to be patched up people.