Last night I listened to a podcast about the psychology of a stalker. A young woman, through no fault of her own, had encountered a patron at her work and treated him nicely, the way she did every customer. The man who received her professional courtesy and kindness took it as a gesture of a personal declaration of her love for him. From then on he would show up at her work, her home, parties and other places. At first, he would watch her for hours, then he began writing poetry, calling her at home, declare his love for her and her for him at different and unexpected places. She reported his behavior to the police, depended on friends to keep him away, moved twice to locations almost five-hundred miles apart. Still, he found her.

He wrote a blog about being a stalker in which he wrote about a love that was benevolent; kind, kindly, kindhearted, big-hearted, good-natured, good, benign, compassionate, caring. He insisted she misunderstood him and accused him of being malevolent; malicious, hostile, evil-minded, baleful, evil-intentioned, venomous, evil, malign, malignant, rancorous, vicious, vindictive, vengeful. He had plans of “fake” kidnapping her and after she went away with him, falling in love with him. His behavior was spiraling and finally, after attacking another woman, he was put in jail for thirteen months for assault, stalking and predatory behavior. Before, during and after being incarcerated, he wrote a book about a man who fell in love with a beautiful woman who eventually learned to love him. People can find the book for sale online today and the blog he still writes.

Love gone wrong, gone bad, corrupted, coercive and corrosive is not love but selfishness painted in illusion. As I listened to the podcast last night I couldn’t help but think a lot of what’s wrong with our world today is people not knowing the difference between malevolent and benevolent.

Here is Tennessee and even across America, there is a question that is on many people’s mind; “Why did the father of a five-year-old Autistic boy beat his son to death and then hide his body? How could this father then claim the boy had wandered off and allowed law enforcement officials, volunteers, and others to search areas near his home for three days thinking the boy was alive?” (http://fox17.com/news/local/dad-beat-son-joe-clyde-daniels-to-death-hid-his-body-in-remote-area-affidavit) Its horrible, vile, evil, confusing, and no matter the answers they will not satisfy a grieving family and community.

The next two days I will be training to be a trainer in Adverse Childhood Experiences. According to “SAMSHA (Substance Abuse Mental Health Agency) describes “Adverse childhood experiences or (ACEs)” as stressful or traumatic events, including abuse and neglect. They may also include household dysfunction such as witnessing domestic violence or growing up with family members who have substance use disorders. ACEs are strongly related to the development and prevalence of a wide range of health problems throughout a person’s lifespan, including those associated with substance misuse. ACEs include: Physical abuse, Sexual abuse, Emotional abuse, Physical neglect, Emotional neglect, Intimate partner violence, Mother treated violently, Substance misuse within a household, Household mental illness, Parental separation or divorce, Incarcerated household member.”(https://www.samhsa.gov/capt/practicing-effective-prevention/prevention-behavioral-health/adverse-childhood-experiences)

Put simply; what happens to one when growing up impacts that individual’s behavior, physical and mental health as adults. It changes the question from; “Why or How could you?’ to ‘What happened to you?” The difference is all the difference. It allows for context and the ability to understand, not approve, why a person would do something incredibly harmful to others or to themselves by researching their backgrounds, cultural, community, familial and social environments.

It will be a challenging and difficult two days especially in light of the tragedy that unfolded over the past week. However, only when our emotional and intellectual biases are confronted can we move beyond them to greater wisdom and knowledge.

Earlier this week I watched a powerful documentary on people being released from prison. It was a story of two men who were sentenced under California’s outdated and recently reformed Three Strikes Law. Simply stated the law demanded that any criminal who was arrested and found guilty three times received a harsh prison sentence often 25 years to life. After almost 20 years of being in place, the penal system and the citizens of California realized it wasn’t effective, led to overpopulation in the jails, severely impacted people of color, and left a trail of broken families in its wake.

The documentary follows two of the thousands of men who have been released for petty, non-violent crimes, after serving decades in jail. The transition for both of them was difficult, however, one was able to get back on his feet stay clean and sober, get married and be promoted in his job. The other man, who had a strong family and church structure, struggled mightily. Old demons such as drugs and mental health issues kept him unbalanced and unable to find his groove the way the first man did. At the end of the documentary both men were still out and making their way the best they could.

As I watched the film I couldn’t help but feel for both of these men. I work with men who are incarcerated and addicted. Addiction is a powerful force for evil and destruction. Incarceration can also be a doorway to a life of crime and recidivism but I’ve also seen men who learn how to make different choices so as not to end up in the same predicament.

Men who do three things greatly reduce their chance of going back to jail or getting back into their addiction. The first is having a positive home environment that might not necessarily be with their biological family. The second is a full-time job, a chance to do something and receive. The third might be most important and that is living a life around positive people, folks who will pull you up not drag you down. These three things, which most of us take for granted, will help men stay balanced, sure-footed, and on the path to a new life.

Psalm 121
1 I lift up my eyes to the mountains where does my help come from?
2 My help comes from the Lord, the Maker of heaven and earth.
3 He will not let your foot slip he who watches over you will not slumber;
4 indeed, he who watches over you will neither slumber nor sleep.
5 The Lord watches over you the Lord is your shade at your right hand;
6 the sun will not harm you by day, nor the moon by night.
7 The Lord will keep you from all harm, he will watch over your life;
8 the Lord will watch over your coming and going both now and forevermore. 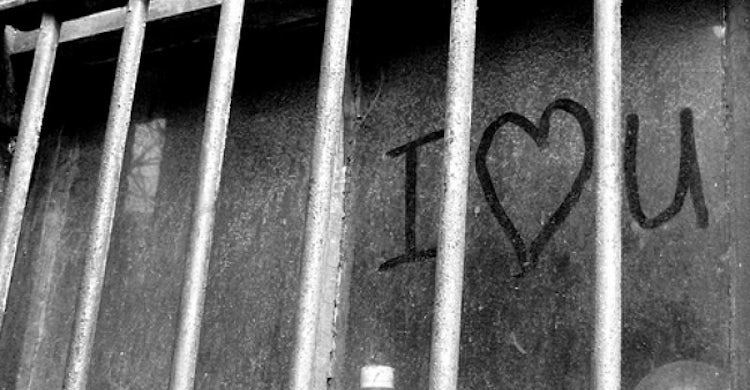 This afternoon I sat in a classroom at the local county jail waiting for the men in my class to arrive. At jails and prisons, they’re never on your timetable, you are on theirs. Just outside my class is a phone the residents use to contact “those on the outside” be it family, friends, or others. A man was using his phone time and talking loud enough I couldn’t help but overhear his conversation. He was begging his mom to make contact with the mother of his child and find out if she would bring their daughter to visit him. Apparently, it’s been a while and he wanted desperately to see her, talk with her, be a dad to her.

This isn’t an uncommon scenario for those who are incarcerated. Their freedoms and controls are stripped away. They can no longer go see someone, do something when they desire, but instead must wait and hope that the object of their affection comes to them. I’ve had many dads in my classes who haven’t seen their children since they were incarcerated because the mom refuses to bring them to the jail. There are valid and questionable reasons which inform the mothers’ choice but the father is powerless either way.

Love confined, locked away, kept from its beloved is one of the great tragedies. Love fully blossoms when it embraces, touches, pulls close the one desired. One of the most difficult losses for our incarcerated fathers to accept is the lack of presence in their loved one’s lives. They understand it was their choices which made it so but they also know; “the heart wants what the heart wants.” So, they will keep asking, begging, trying to stay involved in the lives of those whose worlds consist of more than cement walls, metal bars, and constant reminders that love must be stronger than.

Safe is Not a Place

Last night it was my privilege to give a group of dads a graduating certificate from our Incarcerated Fathers’ class. We began the evening by highlighting the previous twelve weeks and the core values we’ve learned as we walked this path together. Then each dad was called up to the front of the classroom and handed an official certificate stating they had completed the course.

I asked the fathers what they had learned over the last three months. Answers included; “how to respect others, communicate, control emotions, expressing emotions in productive ways, better understanding of how to love their children and family, self-awareness and the need to keep trying and not give up.” I followed by inquiring what they would miss about the class. One father stated; “Being with a group of guys and not worrying about sharing, someone judging, knowing we’re all on the same level trying to be better men and better dads.” For a man to express this in a jail, with a group of men he spends almost every minute of every day was huge and humbling.

One of the keys to listening, learning and changing is feeling safe and jail can be a dangerous place. In spite of being filled with people it can also be depressingly lonely. You keep to yourself, mind your own business and try not to get on the wrong side of anyone. You’re on edge constantly and never let your guard down. For a place designed to keep groups of people confined and secure, isolation and fear are ever-present.

Bring together a group of men who’ve seen the worst this world has to offer, living in a place they don’t want to be, put there by both their choices and the choices of others, plop them in a room and trouble seems the likeliest outcome. However, the opposite can happen if you treat them with respect, listen to their stories, see them as equals and commit to walk this part of their journey with them. Do this and friendships are formed, confessions are uttered, weaknesses recognized, worth is bestowed and people become more than what they believed possible.

We are all so very much alike. What unites us is far greater than what divides us. What we need is someone to help us feel safe, a person who makes us feel accepted, loved, appreciated, valued for where we’ve been and where we’re going.